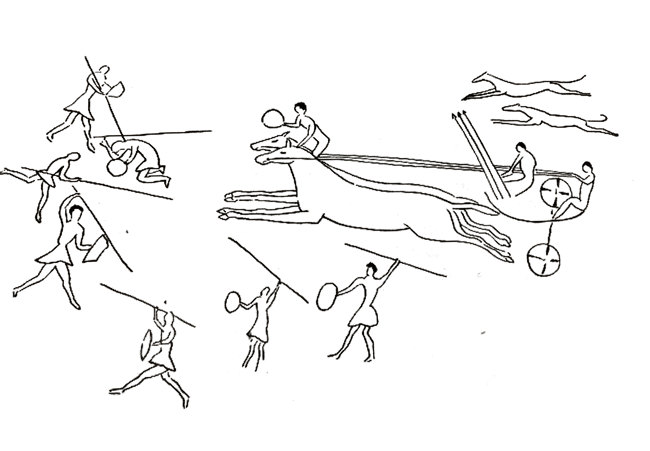 The experts, although not unanimous, consider that the Greyhound could have had its origins in the Middle East. Drawings of Greyhound-type dogs have been found on walls in Ancient Egyptian tombs, dating as far back as 4000 BC. Though dogs of the type spread through Europe over the years, it was in Britain that they were developed to a standard.

The first known written use of the word greihund occurred in 1210 in a document that was added to the earlier Forest Laws of England’s King Canute. These laws set aside forest areas for hunting by the nobility, and no common man or dog was allowed to enter. Medieval castle manuscripts throughout Europe and Asia document hunts with large packs of Greyhounds, recording the dogs used and the variety of prey including deer, stag, hare, foxes, and the occasional bear and boar. Royal hunting packs were large, with Greyhounds of varying sizes.

Different sized hounds were released, with the choice depending on the prey that was encountered. In 1370 Edmund de Langley wrote the first breed standard and hare coursing became increasingly popular in England.

In 1650 Queen Elizabeth had formal rules drawn up for coursing game. In these coursing events, dogs were matched against each other and against the hare; testing speed, agility, and endurance in the open field.

What other ancient breed was so popular, adaptable and so useful? Normally, the country of origin gives many clues into understanding a breed. For the well-traveled Greyhound, these factors are diverse and many are unknown

In a breed in which antiquity and variety in geography and prey understandably allow for variations in type, style, and size, what can we look for to help us assess the individual dog in a show ring?

Today's standards are generous and open, allowing for the proper variety that has traditionally existed in Greyhounds.

(From greyhound FCI Standard and Greyhound: a Study Book to the AKC Breed Standard)